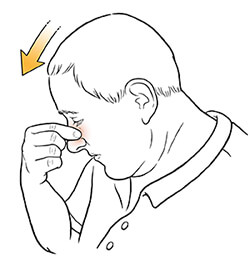 External bleeding occurs when the body’s protective skin is broken. In severe cases, blood loss may place the victim’s life in danger. Direct pressure and elevation usually stops bleeding, even the rush of blood from an artery.
Call 911 if you can’t stop the bleeding or the victim shows signs of shock.

Reassure the person with the nosebleed and tell him or her to do the following:

Bleeding: How much is too much?

The victim’s age, body size, and overall health all help determine when bleeding becomes serious. Concentrate on the victim’s condition and appearance—not on the amount of blood lost. Watch the victim for signs of shock. If any shock symptoms appear, blood loss is a threat to life.

Signs to watch for: